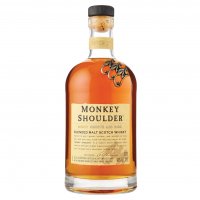 Monkey Shoulder is a blend of Speyside single malt Scotch whiskies married together for flavor and consistency. The richness and vibrancy combine with fruity aromas and mellow vanilla, making it perfect for mixed drinks and cocktails. Monkey Shoulder casks are former bourbon casks, which add smooth vanilla flavors to this Scotch. It also has no grain whisky whatsoever anywhere in or even near the drink. It's barley all the way, folks. The name Monkey Shoulder might sound funny, but it has a history in whisky making. The maltmen who used to turn the barley would take long shifts, using their dominant arm significantly while working. At the end of the day, their shoulders would droop on one side, an ailment that became known as "Monkey Shoulder." Thankfully, the condition no longer exists, but the name lives on in our whisky. Monkey Shoulder is made for mixing and stands out most in mixed drinks, given its orange and vanilla flavors with a bit of spice. Refreshingly approachable, try it in easy-to-make cocktails like whisky and soda (Monkey Splash), whisky and ginger ale (Ginger Monkey), and the Lazy Old Fashioned.