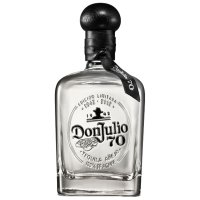 Don Julio 70 is an aejo tequila that is filtered to remove the color imparted in the aging process. It is aged for 18 months in used American white oak barrels. 70 does not refer to the proof (which is 80 proof), but to the 70th anniversary of the distillery Don Julio started in 1942. This bottling was released in 2012 to commemorate that occasion.