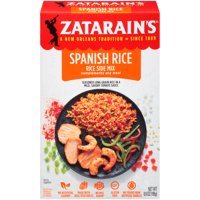 More than 1,500 years ago, North African immigrants brought rice to Spain, where the crop thrived. It wasn’t long before Spanish cooks were simmering rice with onions, bell pepper, garlic and tomatoes to create what is known in the U.S. as Spanish rice. Spanish rice is popular for its flavor and versatility. Simply add fresh tomatoes to Zatarain’s Spanish Rice and serve alongside steak, chicken or any Latin American-inspired entrée.